Best Practices for Archiving an Artistic Legacy in the Digital Era

Developing a digital archiving strategy is essential for any practicing artist or nonprofit arts organization, however it is something that also demands significant resources such as money, time and specific knowledge.

The Machinery team sat down with Hélène Brousseau, librarian at Artexte, in order to help demystify this complex subject and to help attempt to bring it from the peripheries of our organizations and instead closer to their centre.

Machinerie : To start things off, why would you say having a digital archive and classification strategy is so important for an artist or nonprofit organization?

Hélène : I would say that investing time in digital archiving makes life a lot easier in the day-to-day operations of an organization. Overall it helps you organize your documents, create a classification system of these documents and obtain a sense of consistency in your work. Normally it involves more theoretical solutions like applying naming conventions to your documents or having a classification scheme so you know where your different files are located. These solutions can be applied to any situation, and they don’t rely on a software or a company that costs money.

At its crux, archiving comes down to the question of what legacy you, as an artist or nonprofit organization, are leaving to the milieu in which you are working. Essentially, if you are unable to go back in the past through your archives then you are not leaving a legacy of your organization for the future.

Machinerie : I was surprised to learn of the legal obligations that are involved with maintaining a digital archiving system. Could you talk a little bit about that?

Hélène : There are only a few legal obligations with respect to archiving, which mainly concern human resources and financial documents. For financial documents you have to keep them for a period starting from the fiscal period you are in plus six years after that. For human resources you have to keep the documents for much longer, which I think is sometimes a surprise for people. In the cultural sector we end up working in so many different places and we are not always thinking that far down the line, though at the same time it is artists and cultural workers who are the most at risk in the end because when they retire they may not be able to identify all the income that they have received over the years, which will affect their ability to receive an accurate pension later on in their life.

I know that sounds very disconnected, because to us the concept of retirement seems so far away, but it is something that is important to address because in this system artists are already generally living in poverty. It is something I think we do our best at, but regardless it is good to remind ourselves that there is this obligation to keep those records. The baseline rule would be to keep an employee’s record of employment for a period of 75 years, so if you have someone that was employed by your organization at the age of 20, when you add 75 years to that you more or less account for the maximum lifespan.

Machinerie : What would you say people most misunderstand about digital archives?

Hélène : I think people often put a lot of faith in their capacity to use keywords to find what they are looking for and I also think that they may have a lot of skepticism towards putting in place a classification scheme and to having a rigid structure. I think that generally-speaking people often underestimate how much value there is in having a classification system and in taking the time to stick to it. We have a lot of faith in the Google search method, which encourages us to simply type in a few keywords to find the answer that we’re looking for. I think some people feel that it’s going to be an extremely difficult task to put this kind of system in place, but actually when you get into it, it can become quite fun to see everything start to fall together and make sense.

It seems to me that we are often reporting on exhibitions or productions and how many people attended, but if we also added one line about digital archiving it would highlight the importance of doing this work. Archiving is something that takes a lot of time and investment and it has value for what is going to be left afterwards -- especially for cultural organizations.

Machinerie : I have heard that our digital files could have an impact on the environment. Would you be able to elaborate on that?

Hélène : Yes, in fact the last time I gave my workshop in Laval (a few weeks ago) was the first time I introduced this idea of the impact your digital archive management can have on the environment. At some point, even if the information is digital, there is a machine that is storing it somewhere in the world, and even if it is on Google somewhere, we don’t have an idea of how many times they have the information in order to make sure that they preserve it. If you have gone through all your files and deleted what is redundant, enabling you to filter through what has value and what does not, then you eliminate a lot of documents that actually have an environmental impact. It’s not like with paper where if it is in a box somewhere it’s just sitting there and it doesn’t have an additional impact, but with information on the cloud or with your email, it is always being maintained so it always has an impact — even if just a small one.

I think this is what gets through to people more now when trying to communicate the importance of having a digital archive system. It is easier to encourage people to put this system in place because it is beneficial to the environment than for the reason that it will help you find the right information on your computer. I think this is largely because this line of thinking, our concern for the environment, extends beyond us as individuals and addresses the fact that our digital archives can have an impact on the world we live in.

Machinerie : How can people remain up-to-date in a field that is constantly changing?

Hélène : That is a good question. I feel like myself as an archivist, I’m always asking myself this question and I don’t have a go-to resource that I use in order to verify things. Digital archiving is really about constantly being vigilant about where your information is and continuously asking yourself if it is secure. It’s a question of never taking for granted that you have found the final solution. I suggest putting in place some kind of a calendar as an annual reminder to re-evaluate where your information is, whether it is still safe, if you have all the tools that respond to your needs, in order to make sure that you have this constant cycle of questions that you are asking yourself. You have to always be a little bit on your toes because digital content management is always evolving, it’s a continuous process of identifying risks and responding to these risks by asking yourself where your information could be instead. Digital archiving is really migration and risk management.

Machinerie : Where can people go to get more information?

Hélène : There is an initiative called the Plan culturel numérique with the government of Quebec, which is a plan to evaluate the digital transition taking place in the cultural sector. Through this plan they have different measures that they are putting in place; one of them has been to hire people to act as digital development agents (agents de développement numérique) for a period of three years. These people are mandated to support cultural organizations in their digital transition and they publish a lot of information on the subject. They are great resource people and there are forty digital development agents in Quebec who have this position assigned to them either by territory or by sector. They work in what you would call a communauté de pratique, meaning that they are situated in a community and they help each other out with the different problems that they are faced with. Their role is to support organizations, meaning that their work is quite varied in scope, for example they could be giving advice to an organization on how to manage their digital archives and they could also give advice on migrating to G Suite, on digital preservation or on whether you should put an entry into Wikidata. I would strongly recommend that people look at who is representing their sector and check out what their agent has published on the subject.

Machinerie : Before we finish up, is there anything else that you would like to add?

Hélène : Yes, I really would encourage everyone to add managing their archives — their legacy — into their grant reports. In this way you are not asking for the money right away but if everyone added digital archiving to their activity reports and to what they have actualized throughout the year, I think that would valorize the practice of digital archiving. It seems to me that we are often reporting on exhibitions or productions and how many people attended, but if we also added one line about digital archiving it would highlight the importance of doing this work. Archiving is something that takes a lot of time and investment and it has value for what is going to be left afterwards — especially for cultural organizations. 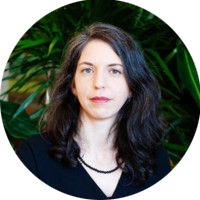 Hélène Brousseau is a librarian, specialist of the digital collection at Artexte. She is interested to the issues about accessibility, free access dissemination and the use of archives and datas by artists in visual arts.